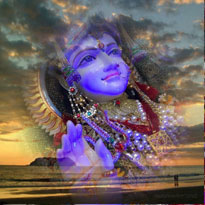 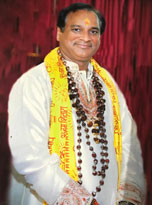 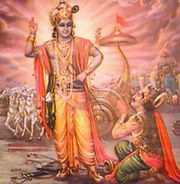 The Bhagavad Gita is a dialogue between Lord Krishna and Arjuna. It is narrated in the bhiishhma parva of the Maha Bharata and was subsequently recorded by Vyasa for the benefit of humanity. It comprises 701 verses in 18 chapters. The Mahabharata has given us many great values, but the two most significant ones are the Bhagavad Gita and Vishnu Sahasranama. Ironically, both of them are presented in the battlefield, the Bhagavad Gita being presented just before the onset of the war of Kurukshetra and the Vishnu Sahasranama, after the war. The Gita stands as a guiding manual for the daily conduct of life, spiritual upliftment and Self-realization.
We all have Kurukshetras within us. The battle of Mahabharata is raging within us! Our ignorance (avidyaa) is King Dhritarashtra! The individual soul is Arjuna! The In-Dweller dwelling in our heart is Lord Krishna, the charioteer! The body is our chariot! The senses (indriyaas) are the horses. Our ego, pride, greed, hypocrisy, lust, jealousy, likes & dislikes, etc. are our dire enemies! The secret of the tremendous appeal of the Bhagavad Gita is in the fact that it deals with a practical problem of everyday life, namely, how can a person do his duty in this society with righteousness. The society is itself so filled with flaws that each of us wonders whether what we do is right or wrong. The Gita helps us to solve this riddle and teaches us the right way to lead life.
Gita formulates the theory of the three paths (margas), namely, Knowledge (GYaana), Devotion (bhakti) and action (karma) and combines the three philosophies wonderfully, thus teaching us that action, devotion and knowledge should work in perfect harmony! By abiding by one’s duties of life(or svadharma), one can attain the Absolute (or moksha) and the Gita teaches each of us, what is our dharma and how to adhere to it. That is the reason why our scriptures prescribe Bhagavad Gita as one of the five scriptures that should be practiced on a daily basis:
Bhagavad Gita 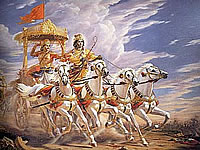 is also hailed as brahma vidya (Knowledge of the Absolute) which is the highest knowledge that a spiritual aspirant seeks. Bhagavad Gita is also hailed as yoga shaastra since it deals with the practice of the highest ideals in all walks of life. ( actually each of the chapters of the Gita is named as a yoga – bhakti yoga, karma yoga, GYaana yoga, etc.).
The Gita teaches us to lead life without attachment, like a lotus-leaf which remains in water, but does not wet its surface. The one who places all actions in the Eternal, abandoning attachment, is unaffected by sin . Attachment arises due to desires and is due to the lower qualities of the mind. Non-attachment is born out of Sattva which is a divine attribute. Practice of non-attachment is rigorous and the only attachment one should aspire to have is towards God or Atman.
A true aspirant is expected to possess the qualifications of viveka (discrimination between good & bad), vairagya (dispassion), sama (control of mind), dama (control of senses), uprati (not influenced by worldly attractions). Srimad Bhagavad Gita teaches us the theory and values of these qualifications and as a yoga shaastra, teaches us the way to practice them in our path towards God-Realization. The Bhagavad Gita brings the greatest wisdom to human life. Some people feel that Gita should not be taught to children and if youngsters read it then they will become sannyaasis. This is not so. The Gita has not asked us to renounce all activities and become a sannyaasi. Even Arjuna, who directly heard it from the Lord himself never became a sannyaasi. The purpose of the Gita is to teach the truths of the vedaas to us in such a way that we can practice it.
The Gita aims to teach us lessons so that we can elevate our day to day life and activities.. When we are born as humans, our aim should not be just to earn a living and exist in this world. Then we will be no different from animals. This is a total waste of human life. Using the human life for pursuits such as eating, sleeping and chasing sense objects is like bringing a talented painter such as Picasso or Rembrandt to paint the walls of a house!! We should understand that the human life is a gift to us. It is the only life form from which we can reach God. The Gita teaches us the value of Human life and it directs us to the ultimate goal of God realization. It teaches us how we must perform actions in such a way as to make them noble. 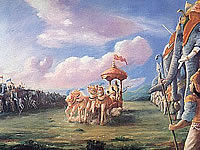 yatra yogeshvaraH krishhNo yatra paartho dhanurdharaH
tatra shriir vijayo bhuuthir, dhruvaa niithir mathir mama
Wherever is Krishna, the Lord of Yoga & wherever is Arjuna, the supreme archer (the true & determined aspirant), there are prosperity, victory, glory and righteousness. This Sloka is said by sanjaya to dhritarashtra and is an answer to Dhritarahstra’a question about the war. Sanjaya says indirectly that there is no doubt that the pandavas will win the war.

The Gita can be compared to a kalpataru or a wish fulfilling tree. Whatever we seek to learn, we can get it from the Gita. Each person who reads the Gita can understand it from a different level. It can give lessons to a beginner as well as a pundit. Based on the state of feelings, each person can understand the Gita depending on the stage that they have reached in the spiritual path. There is plenty of water in an ocean, but what you can bring away from it depends on the size of the vessel that you take. Similarly the messages will be vast but what we get from it depends on our capacity to absorb. The basic message of the Gita is the same and its purpose is to transform humanity to divinity. We should therefore not take such a book lightly. We should approach it with devotion and commitment and not only try to learn the teachings, but more importantly strive to practice it. Only then we can attain fulfillment in our lives.