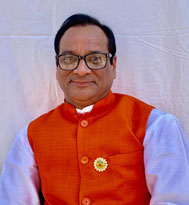 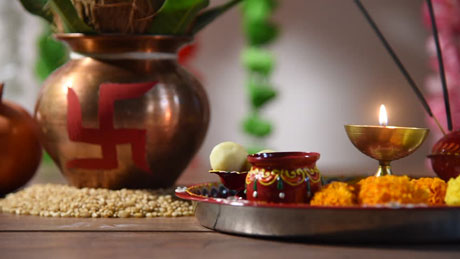 The Satyanarayana Vrat and Pooja is a popular ritual performed to please Narayan or Lord Vishnu. It can be performed any time but the full moon day is a good time when most Hindus perform this pooja. The month of Shrawan (July/August) or on starting a new phase in one’s life like a new business, wedding, a new house etc. The essence of this Vrat is to accept the Almighty Lord Vishnu as the Truth and take the vows of truthfulness in one’s day to day living, discarding at the same time the ego. In doing so, eternal peace is yours as well as whatever material requirements are fulfilled.

This is done before ground breaking. After purchasing the land the person have to contact their astrologer to take the muhurta for ground breaking . Then on the basis of that muhurta Panditji will do Puja and Yagya.

It is done after completing the house and on this day special Yagya very briefly will take place and the house owner with family will enter in that home. This Yagya is for pacification of all negative energy and increasing more harmony, welbeing and overall progress in that home. Many things have to followed during the time of construction. Panditji will guide if some one needs his service.
So importantly for having a good house according to Sthapatya Veda is, choosing a proper land, starting every thing with proper muhurta and Yagya, construction as per the vedic rules and performing Vastu Yagya before entering the home first time .
Kaal Sarpa Yagya
The actual meaning of Kaal means death. The person born under Kaal – Sarp Yoga passes through death like situation for the entire life. The Kaal Sarp Yog is formed when all the planets are present in between Rahu and Ketu. According to Indian astrology, there are many types of Kaal Sarpa Yogas are there. If in between Rahu & Ketu all seven planets comes then it is not good. The person who takes birth in this Yoga faces different kind of problems and instability in life like problems in teen age, disturbances in mind, loss in business, family problems etc. A person who has Kaal Sarpa Yoga in the horoscope always fear from death ,suffer from any tension, insecure. This Yoga is more dangerous than other malefic yoga. This Yoga effects a person till 30 to 47 years and some time entire life, it depends upon the position of Kaal Sarp Yoga in the birth chart. So it is important to find out the Kaalsarpa Yoga in the chart and which bhava (houses) are effected. Relationship between Kaalsarpa Yoga and present maha dasha- antardasha etc.
Some very special Yagyas are there to neutralize the Kaalsarpa Yoga in the chart and get more benefic results. It is always wise to do Planet Yagya along with the Kaalsarpa Yagna.
Devi Mahatmyam or Durga Saptashati or Chandi Path
The Devi Mahatmyam is a collection of 700 Slokas on Sri Durga from Markandeya Purana Navaratri is celebrated four times a year. They are Ashada Navaratri, the Sharada Navaratri, the Maha Navaratri and the Vasantha Navaratri. Of these, the Sharada Navaratri of the month of Puratashi and the Vasantha Navaratri of the Vasantha kala are very important. If you refer to the agni purana, then it is said that the Puratashi and Panguni (in Tamil months) i.e. Asvin and Chaitra are like the two jaws of Lord Yama. If one wants to escape the mouth of Yama, then one should celebrate Navaratri on these two occasions. A similar analogy is presented in the devi bhagavatam. Devi bhagavatam also talks in detail on how one should observe fasts, and how one should meditate/work on these days. According to legend, Durga sat on the tip of a needle for nine days, doing a severe penance to destroy the evil Asura Mahisha. On the first three days, she meditated as Herself, the next three days as Mahalakshmi and the last three days as Sarasvati. This signifies progression from tamsik, to rajasik to satvik and eventually obtaining liberation. The tenth day during Sharada Navaratri is called vijayadashami to signify the victory on the day of dashami. It is, however, a long tradition that one reads the devi-bhagavatam or the devi mahatmyam (Durga saptashati, 700 verses on Durga) during this period. Devi bhagavatam notes that Rama meditated and fasted for nine days after Sita was kidnapped by Ravana. It is considered auspicious to recite the Devi Maahaatmyam during Navaraatri
Mool Shanti
These special Yagyas are performed to alleviate the negative effects of the natal moon’s position in Aswini, Ashlesha, Magha, Jyeshtha, Moola or Revati. Depending on the natal chart, they may be combined with Yagas to Ganesha, Durga, Vishnu or Siva, or with the Navagraha Shanti Yagya.