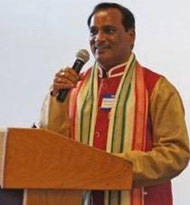 Gems represent the most compact and powerful expression of the intelligence and order of natural law.The knowledge of the correct recommendation, type, quality and use of gemstones provides greater harmony in life.Each of the nine grahas (planets) has a corresponding gemstone. For optimal influence, each gem must meet specific criteria of purity, color, shape etc. Consult Archaryaji for advice in the right gemstone for you.

Manikya or ruby, the rarest of gemstones, is red sapphire and often regarded as the king of gems Rubies vary in color and brighten in strong light. Some rubies are pinkish red or violet/purplish red in color, with different colors and shades of color often found in the same stone. They balances Surya (sun). Surya represents the king of the solar system in Jyotish. It also represents authority, power, Self, father, body and health. Depending on the placement of Surya in your birth chart, the wearing of a ruby may be very auspicious in strengthening the positive influences of Surya. Surya, the sun acts like the thalamus in the human physiology. The sun is the central focal point in the solar system as is the thalamus in our body. All activity in the solar system revolves around the sun. In our physiology, all activity is controlled and ordered by the thalamus. Enlivening the positive influences of Surya strenghens the physiology and strengthens the qualities of Surya in our daily life.

Mukta or pearl is the most valued of the organic gems. A pearl is a very special and exclusive gift of nature considered universally as the oldest known gem. The most valued come from the ocean and have a visible lustre or sheen with the most common being white or cream with a rose overtone. Mukta or pearl represents the queen in Jyotish. The pearl is often called the “queen of the sea”. The pearl harmonizes Chandra, the moon which directly influences emotions, mind, affluence, and public. Wearing a pearl can bring harmony and stability to these influences. Chandra, the moon, occupies a central role in the solar system and in our physiology. This influence is represented by the hypothalmus in our physiology which controls our behavior, our emotions, our hormonal and reproductive cycles and our body temperature. It nourishes the physiology like a mother or queen and occupies a central place in the centre of the brain with the thalmus.

Vidruma or coral is an organic gem that comes from reefs and atolls. The most valued coral is the noble red coral seen here (Corallicum rubrum). The color is uniform throughout with no pits or color streaks. Polished coral has a vitreous lustre. Due to pollution, coral is an endangered species. Vidruma or coral influences Mangal or Mars which is responsible for the field of activity, energy, courage, ambition, sports, property, strength, commander, technical ability, mechanical, forcefulness and bravery. In Jyotish, Mangal is known as the commander-in-chief, due to its influence in organizing and managing direction in activity. Mangal or Mars is like a general with its focus on precision and power in activity. Mangal in our physiolgy is associated with the Red Nucleus, Pars Compacta, and Amygdala. These structures in the brain control activity by providing checks and balances, activating and inhibiting impulses in the brain, and maintaining steadiness and precision of movement. These influences can be strengthened with the wearing of Vidruma or coral when recommended.

Marakata or emeralds are known by their distinctive green color and can vary from light to dark green. All emeralds contain inclusions formed during their growth. Inclusions indicate the stone is natural. The most common cut is the step or “emerald” cut. Marakata or emerald harmonizes and strengthens the positive influences of Budha or mercury. These influences include intelligence, education, speech, teaching, learning, communication, confidence, writing, drawing, trade, humour, wit, discrimination, diplomacy. intellect and commerce. Budha or Mercury is the “prince” in Jyotish and is influenced by Surya and Chandra. Budha or Mercury in the human physiology is associated with the sub-thalamic nucleus which resides in the brain and receives input from various parts of the brain which directly influences its activity. Similar to the placement of Budha or Mercury which revolves around Surya (Sun) and is directly influenced by that relationship, the sub-thalamic nucleus’ activity is influenced by the input it receives and modulates its output accordingly.

Pushparaga or yellow sapphire is a lesser known gem in today’s market. Known as “Oriental topaz” until the mid-1800’s Colors vary from light yellow to golden and honey yellow. They have considerable lustre, come in a variety of cuts and are increasing in market value. Pushparaga or yellow sapphire harmonizes and benefits t signifies knowledge, wisdom, virtue, fortune, justice, education, future, religion, philosophy, devotion, children, distant traGuru or Jupiter, the largest graha (planet) in the solar system. Ivel, spirituality, truthfulness, prosperity and charity. Guru is the major instructor or teacher and influences action with the highest order and balance. Guru guides action in the most harmonious and uplifting manner and balances inner and outer input while simultaneously performing and monitoring action. Guru or jupiter’s influence in the human physiology is through the globus pallidus. This globular structure is like a teacher in the physiology. It gives balanced and higher-order instructions, balances and maintains harmony between inner and outer input, manages and executes complex systems and enlivens activity in the brain while guiding action. It signifies highest-order thinking — Knowledge has organizing power. 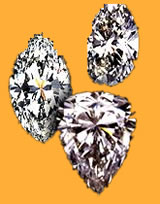 Vajra or diamond’s adamantine lustre gives a beautiful “fire” or sparkle to the stone. Value is determined by a grading system that rates color, clarity and weight with lesser value given to cut proportions and surface finish. Sukra or Venus is harmonized by diamond. Sukra represents luxuries, romance, partnership wealth, beauty, arts, comforts, jewelry, happiness, and vehicles. Diamonds are also associated with luxuries, jewelry, wealth, beauty etc. Sukra or Venus has since antiquity symbollized beauty, not just in material life but inner life as well. Diamonds high lustre symbolizes the refined liveliness and loveliness of nature within and around us.Sukra or Venus in the human physiology corresponds to the activity of the pars reticulata. This structure in the physiology refines and controls action in the limbic system related to instincts, feelings and emotions etc. This action is associated with those impulses in the physiology that correspond to the qualities of life influenced most strongly by Sukra.

Gomedhaka or hessonite is a variety of grossular garnet. It has good luster and looks transparent. The color is brownish-orange and is often called “cinnamon stone”. These gems are often given step or mixed cuts. Hessonite garnets are found especially in Sri Lanka. Gomedhaka or Hessonite Garnet represents Rahu, the ascending node of the moon. Its natural significations include worldly desires, worldly benefits, laziness, gratification, and ignorance. It is by nature unpredictable and creates sudden changes and influences, rigidity and passion. It is similar to Sani or Saturn in its nature and influence.Traditionally, rahu is known as the “head of the dragon”. In the human physiology, rahu corresponds to the head of the caudate. The caudate is involved in the control of the saccadic eye movements (the abrupt short shifts of focus in the eyes). The caudate influences memory in relation to orientation in space. The caudate is responsible for our ability to change behavior patterns.

Vaidurya or Cat’s Eye is the name given to the variety of chrysoberyl which beautifully displays the phenomenon of chatoyancy. The numerous inclusions line up to form very fine, parallel crystal needles. Cat’s eyes are always cut in cabachons to emphasize the eye effect. Vaidurya or Cat’s Eye harmonizes Ketu which is traditionally known as the “tail of the dragon”. In Jyotish, Ketu is the descending node of Chandra (Moon). Its influences are similar to Mangal or Mars and include liberation, abstract thinking, asceticism, non-attachment, healing, moksha–enlightenment, wisdom and that which is hidden.
Ketu’s influence in the physiology is represented by the tail of the caudate. It’s influence is over learning and emotions.

To obtain the full benefic effect of stone, wear it while Moon is waxing on the specified day and time. Wearing it in the specified Nakshatra enhances the benefic effects of the stone. Take the stone of a size specified or greater in fractions of 1/4 Ratti rejecting fractions of 3/4 Ratti like 4 – 1/4 Ratti. Get it studded in the specified metal such that it touches your body. Before wearing it light a lamp and incense stick and meditate on your God. If the stone is studded in ring then clean the ring in fresh milk and then Ganga water. Perform pooja . Then wear the stone in the specified finger of your Right hand. After wearing the ring give alms as specified for that stone.
If you are already wearing a stone then avoid wearing a contradictory stone . By wearing the stone as specified here gives more benefic results in much lesser time.